[Skip Boring intro]So, years ago I found a mini bike frame with engine on the side of the road. Normal people would have just kept moving, and would not have even gave it a second thought, but then again I’m not normal. Instead, me and my dad pulled over, loaded the frame into the back of his car and brought it home.

After unloading, and then storing in my shed, I mostly forgot about it. This was largely due to me finding how expensive parts where going to be to put the bike back together. So I stored it in the shed where it sat for a few years until Super Storm Sandy hit. The storm ripped down the shed and exposed the engine and frame. From that moment until spring of 2013, the bike frame just sat in the same spot, thought snow and rain.

Once the weather became a little warmer, we cleaned up the spot where the shed once stood and I moved the frame, which at this point I thought would be no longer any good. I was half expecting the piston to be seized in the block, due to water being able to enter the cylinder thought the spark plug whole, but to my surprise I pulled on the pull start and it rotated just fine.

Here is where the story starts.

Well, after the first pull of the string it hit me, “while I can’t [don’t want to] rebuild this into a bike I can get it running again.” So, I started with a spark plug, as there wasn’t one. Just the day before my dad replaced the spark plug in our lawn mower and it just happened to be be the same size that my engine took. After shocking my dad while testing for spark, I installed the new plug. Then I sprayed a little starting fluid into the card and I was able to get a little fire ball out of the exhaust port (no muffler at the time).

From there I thought all would go well, as I had spark but I was very wrong. I put some gas in the gas tank to see if I could get it to run, but as soon as I got the fuel to flow into the fuel bowl, gas started to pour out of the air filter.

This lead me to taking that carburetor apart. Once I got it open, which wasn’t easy from all the years of sitting, I found a few problems. The first of which was all the gunk clogging everything. I fixed this with a little carburetor cleaning spray and a rag. My belief was the float was stuck and not closing, causing the fuel to overflow and with the insides all cleaned it would function normally. Well I put that carb all back together again and mounted it back on the motor to give it another try. Nothing changed and I had gas everywhere.

Now, I didn’t know what to do, so I did what everyone does when they have a problem, I googled it.

What I found was some interesting information. Besides the float getting stuck, another problem that can happen is that a seal which stops the gas from entering in the bowl can go bad. So I took the carburetor apart again and this time I removed the float. What I found was not a bad seal, be no seal at all.

Being that I don’t want to spend any money on this project, I took a carb off an old junk lawn mower I had sitting around to see if I could steal the seal out of it. This carburetor was in even worse shape than mine but the seal was in it and was still good. The only issue was this carburetor is from a Briggs and Stratton and the engine I’m working on is a Tecumseh. So things didn’t really fit correctly, but with a little adjusting I managed to make it work.

Now on to round three! This time, when I put gas in, it didn’t come flowing out, and by checking the drain plug I was able to see that there was gas in the bowl.

What I have now is spark and fuel, all I should need to get the engine started? With a little starting fuel in the carb, I gave the pull start a tug, but nothing happened, not even a cough. After a few pulls, it hits me, the pull doesn’t feel right. Each time I pull the starter, instead of their being a bit of a kick when it should be the compression cycle, the engine just spins. There is no compression, and the fuel is not lighting.

So now I decide that I have nothing to lose and that I will take the engine apart. That’s when I found this… 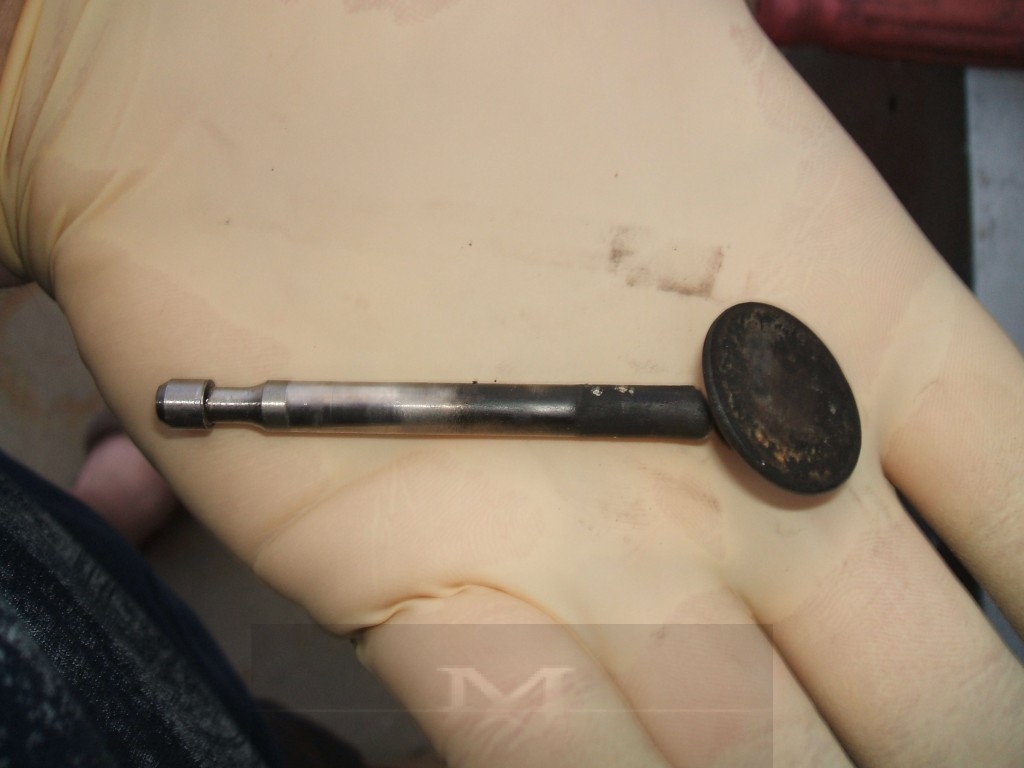 That’s right I had a broken valve in the engine, a broken exhaust valve to be precise. This is why no matter how many times I pulled I couldn’t get anything to happen. Thought to get to the state in which I was able to take the picture above I needed to do some work, which you can see below.

Now that I have the valve out, I need to look into getting a new one to replace it. I have a friend who thinks they have a valve for my engine, so now I just need to sit back and wait to see.

Now, I declare this very long post over and I will write an update when I have more news.